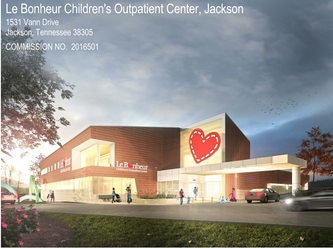 Le Bonheur Children’s Hospital will begin construction on a new 40,000-square-foot ambulatory clinic on Vann Drive during the summer of 2016.
Le Bonheur paid Columns II Partners $1.5 million for 3.4 acres of property located in front of Gander Mountain.
The property is two tracts of land – 1.5 acres at 1531 Vann Drive and 1.9 acres at 1543 Vann Drive.
“Because of our success in recruiting pediatric specialists, we now have the resources to begin an expansion to meet the growing demand for services in West Tennessee,” Anne Glankler, a spokeswoman with Le Bonheur media relations, said. “Le Bonheur is very grateful to be viewed as part of the Jackson community, and this project is a sign of our further commitment to Jackson and to the children of West Tennessee. We want to be the children's provider of choice for Jackson.”
Glankler did not say if Le Bonheur would maintain its 77 Stonebridge Blvd. location, but did say the new facility would be easy to access for patients and families who visit the clinic from Jackson and West Tennessee.
Pediatric subspecialty clinics including cardiology, endocrinology, gastroenterology, general surgery, genetics, neurology, pulmonology, urology and potentially others — diagnostics to support clinics, telemedicine, educational space, therapy outreach and other offices — will be offered.
Glankler said there will be no overnight care at the facility.
There is no timeline for completion of the facility.
“We do not have a developer selected,” Glankler said. “We are currently in the design phase, and we'll have more detailed information once we are through the design phase and we will be announcing specifics in late spring.”
Glankler said she did not know how many people would be added to the staff, once the facility becomes operational.
Le Bonheur Children's Hospital is a 255-bed, tertiary care children’s hospital in Memphis with more than 700 medical staff representing 40 pediatric specialties.
Approximately 170 patients per day are admitted, mostly from Tennessee and nearby states, but also from around the world, mainly due to its nationally recognized brain tumor program and affiliation with St. Jude Children’s Research Hospital, and it is the home of the Children’s Foundation Research Center.